A more dangerous virus than the Covid-19 would have emerged in India, the WHO is very worried, alarmed by several press articles in recent days about the Nipah virus. The information, which has been circulating in French for a few days, was first shared by many Internet users and by several Italian and Spanish media.

” It’s a much more deadly virus than Covid-19 “Say for example the Corriere dello Sport and the Mundo Deportivo. ” Nipah virus reappears in India, it killed 17 people “Writes the Mexican version of the newspaper Subway.

This virus does exist. But to say that the WHO is worried that it could be even more deadly than the Covid-19, which continues to rage, is a big lie. WHO alerts about the virus actually date from 2018. That summer, 17 people died from Nipah in the state of Kerala, in southwest India. The media around the world had also picked up the news at the time, stating that it was then ” almost as dangerous as Ebola “

How did Nipah end up on the front page two years later? It was the result of an unfortunate tweet posted by a Mexican presenter on June 15. The Indian embassy in Mexico cropped it, reminding it that the news dates from 2018. The presenter withdrew her tweet, but the damage was done, several media took up the information without checking that it was dated ‘two years ago, so the fake news on Nipah continues to circulate worldwide. 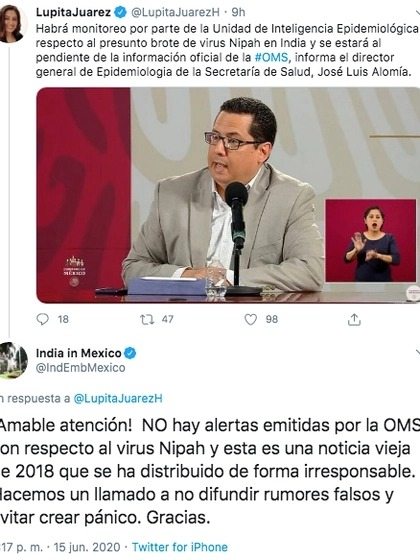 “We are not going to force the French to accept something they do not want,” says the CEO of Orange.

VIDEO. MEP Pierrette Herzberger-Fofana says during a session in the European...

Amazon France will supply its employees with masks and control their...

Geads News offers best news from around the world.

A smartphone app is supposed to slow down the corona virus...